Flopcast 539: Movies With the Mayor - The Spirit

It's DragonCon weekend! So while we're flopping around our favorite convention, please enjoy the return of Movies With the Mayor! This time Kevin and the Mayor of Chickentown are watching and discussing the 1987 made-for-TV movie The Spirit! It's based on Will Eisner's classic Golden Age comic book character, and it stars Sam J. Jones (Flash Gordon!) and Nana Visitor (Star Trek: Deep Space Nine!)... and since Sam is a guest at DragonCon this year, we just had to check it out. Is there a secret headquarters in a cemetery, a femme fatale in a hot tub, a kid selling stolen Whitney Houston records, and a finale involving topless Flash Gordon and a giant cake? Come on, what do you think? It's magnificent. Kornflake is here too with National Whatever Day, celebrating a certain 80s Heather who starred in The Fall Guy and Zapped! Next week: Our DragonCon review. If we survive.

Den of Geek has a nice article on the making of The Spirit. You can still get the Warner Archive DVD from Amazon, or watch a clip that includes shirtless Sam Jones (good!) and the cemetery set (bad!) on the Warner Archive YouTube channel. 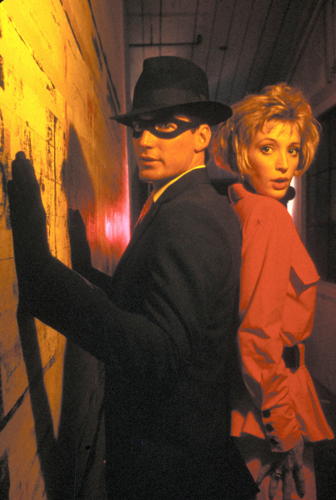